It seems everyone -- from traditional corporations to challenger, neo-banks -- wants to offer customers a card, lending, or faster access to their funds. Now that technology has finally arrived to financial services, legacy financial institutions are rethinking service delivery as new models and businesses emerge. An overview of the infrastructure underneath the payments that power our lives helps to paint a clear picture of how financial institutions work together to move money through this complex network. 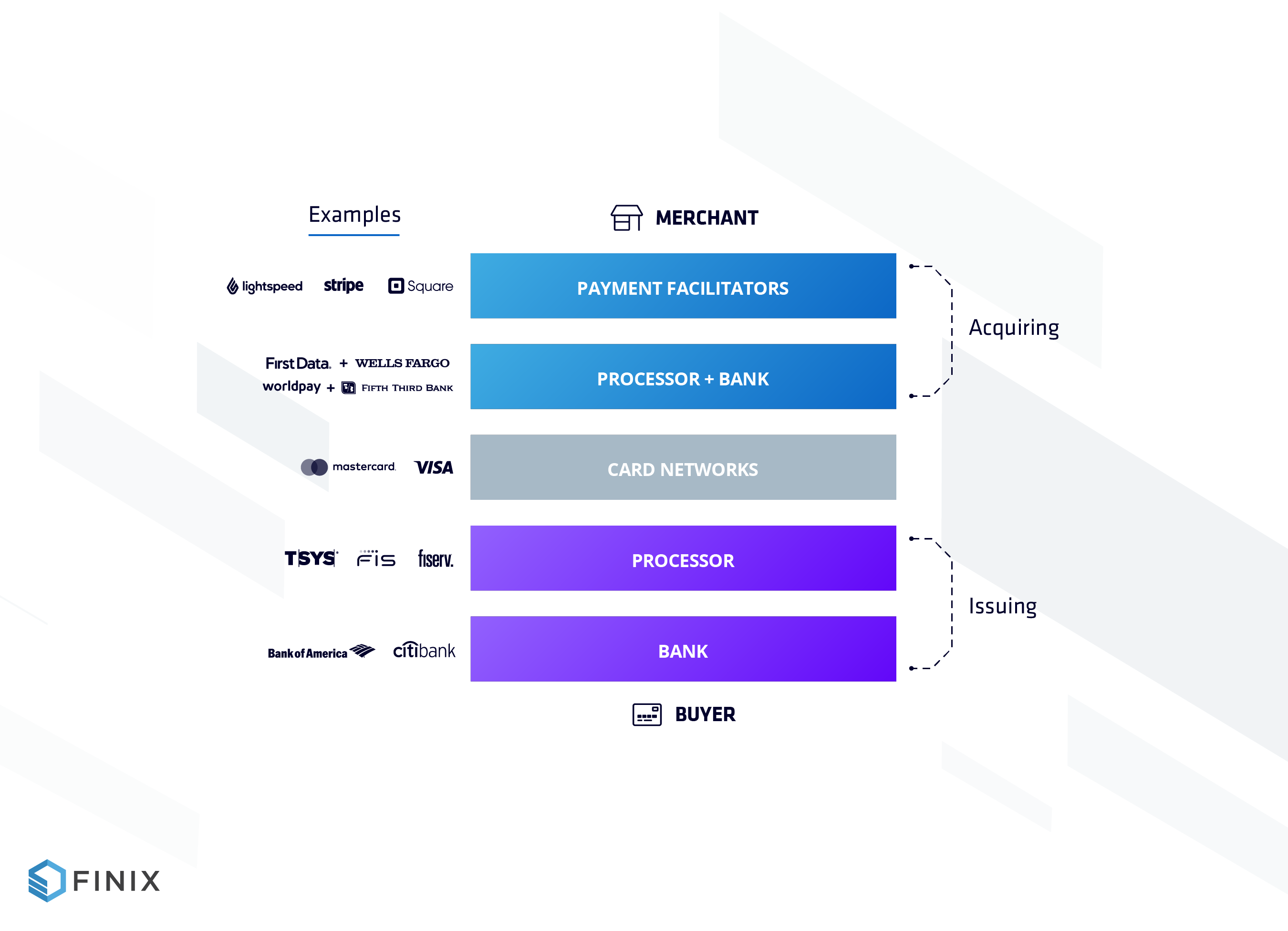 Take a look at the graphic above. Within the industry, this is called the payments stack. Here at Finix, we call it the “payments layer cake.” Each layer represents a specific kind of financial institution that must interact with the other layers for every transaction to make it from the cardholder (the consumer) to the merchant (the business). All of the layers operate around the card networks, which sit in the middle of this complex stack.

There are four major card networks, sometimes referred to as “the brands” in the US. They are by far the largest entities in the financial services industry. Large card networks like Visa and Mastercard have significant authority in the payments industry network, and only bear risk if a bank becomes insolvent. Unlike processors and banks, they do not form relationships directly with merchants or lend credit to consumers. Instead, they provide a valuable, global network and additional services to banks.

In every layer of the payments stack, card networks have some influence. Card networks have the important task of setting the interchange fees that merchants are charged to accept credit cards. They do not set cardholder fees like interest rates, however. Those fees are set by issuing banks.

While most people likely understand the concept of a bank, an issuing bank is a specific kind of bank which has the privilege of issuing cards to consumers on behalf of card networks like Visa and Mastercard. Why is this important?

Aside from the fact that we all use our cards to pay for almost everything online and increasingly in-person, card-issuing banks own valuable consumer relationships, are liable for purchases made by consumers, and are responsible for transferring funds to acquiring banks. They are the banks that hold checking and savings accounts, issue credit and debit cards that can be used on the card networks, and lend credit. Issuing banks have a profitable business model because they earn revenue based on consumer behavior and spending.

Sitting directly on top of issuing banks are issuer processors, not to be confused with payment processors. Unless you work in financial services, you’ve probably never heard of issuer processors like TSYS, FIS, and, more recently, Galileo. These organizations work with the layers directly above and below them, namely the card networks and issuing banks, to approve or decline transactions in real-time.

The layers on the merchant side of the payments infrastructure are collectively called the “merchant acquiring” stack. In the most basic terms, the word acquire means to get. So for financial services, this side of the stack gets or receives information from the issuing side about transactions and cardholder account holders during authorizations and payment processing. Acquiring banks also receive funds from the issuing banks after a transaction has occurred and make them available to the merchant; this is the merchant’s bank.

Processors are the secondary powerhouses of payments infrastructure as we know it. They have the authority to manage a lot of the heavy-lifting associated with processing your payments; that’s why they’re called processors. They primarily process transactions but have also been empowered by acquiring banks to underwrite merchants, manage disputes, and make payouts to merchants.

The final layer is Payment Service Providers (PSPs), which sit atop this stack of financial services. Payment facilitators, a relatively new type of PSP, are the payments infrastructure layer we deal with most here at Finix. The payment facilitation model was developed as a response to the limitations ISOs (Independent Sales Organizations) offered merchants in the 1990s and 2000s. Large SaaS companies needed more robust, customized payments solutions embedded into their verticalized software.

A payment facilitator, sometimes referred to as an aggregator or master-merchant, is a specialized merchant that has many of the privileges of a payment processor: they can underwrite sub-merchants, process transactions, manage disputes, and make payouts on behalf of sub-merchants. Many companies become payment facilitators to control and monetize their own payments stack. Benefits include creating a more seamless merchant onboarding experience and retaining more basis points on every transaction.

To provide context into how each layer of the stack works together, we’ll use an example that’s ubiquitous with modern life, rideshares.

Let’s say you just took a $50 rideshare. Once the ride is complete, the rideshare platform, operating as a payment facilitator, instructs their acquiring processor, First Data, to charge the Visa-branded credit card you have on file for $50. At this point, the processor checks with your issuing bank–via the issuing processor–to see if your card is valid and has enough funds to pay for the ride. The issuing processor authorizes your transaction in a few seconds, which serves as a guarantee that the ridesharing platform will be paid later. The next day, the acquiring bank, let’s say Wells Fargo, receives the funds from the issuing bank and makes them available to the ridesharing platform, who take their fee and send the remainder to the driver.

Valuable businesses are emerging to unbundle this stack of financial infrastructure, demystifying the process by which transactions take place. By creating transparency and ease for cardholders and merchants alike, these new companies and models stand to open up more opportunities for revenue and continued growth. At Finix, we believe payment facilitation is at the forefront of this next cycle of innovation, as payments now represent an opportunity for vertical software companies to do more for their customers. If you’d like to learn more, please get in touch.

Sign-up for the Finix newsletter!
Finix Payments, Inc. uses cookies to support technical features that enhance your user experience and help our website run effectively. We also use analytics to help us improve the way our Site and Service work. Please read our Cookie Policy or change your preferences.
ACCEPT